Sex : Male Approximate Age : 5 – 6 years Purebred or Mix : Purebred Color :  Fawn Coat Type : Horse Adoption Donation Requested : $350 Foster Location : Apopka, FL Approximate Size/Weight : 40 lbs Dog Friendly : Yes Cat Friendly : Unknown Small Child Friendly : TBD Energy Level : Shy, playful after getting to know you. NOTES : UTD on shots, Heartworm positive and undergoing treatment, Microchipped, Neutered. About this Pei :   Nike is a sweet guy with big eyes that will make anyone’s heart melt!  He’s passive and a bit shy but he has good energy.  He’s a great looking shar pei for sure!  He’s skinny with good muscle, his “snoot” is velvety soft and his curled tail wags at hyper speed when he’s excited to see you!
Nike is house trained and joyfully jaunts outside to inspect the yard once we get home.  We’ve been fostering him for about two months and we don’t crate him now, but we did upon his arrival to our home and he did ok in the crate.  He’s very loyal and follows me around everywhere.  He keeps his distance until you invite him closer.  He stays off the bed until invited up and we’re working on simple commands like “sit.”  (Currently he’s doing more of a “squat” on command than a sit, but he’s getting better with it!)
True to the character of many shar pei, it takes a while to build his trust. Nike came to us from a high kill shelter where he had been surrendered after what must have been a life without much loving human interaction.  He was skinny, dirty, sunburned and not interested in being very social.  He’s a “rescue” in every sense of the word.  Initially, he was hesitant to accept even gentle petting.  He’s never lashed out or tried to bite – instead he runs away if he’s not comfortable.  Nike needs a patient owner who will take the time to earn the fantastic cuddles Nike is capable of giving.  He’s learned that it’s ok to come up with me on the couch, to cuddle in bed and to sit with me on the floor.  It’s taken time and will probably take time in his forever home too.
We have two “permanent resident” shar pei who help us foster pups like Nike.  Nike has done well with them, but he’s definitely a follower and not the leader of the pack.  He’ll play around some with our alpha dog, but basically submits to any dominant behavior.  As long as he’s in a home with other dogs who are not aggressive, he should do ok.  But a house with a very hyper or super playful dog would not likely be the right fit.
If you are interested in learning more about Nike as an addition to your family, please, complete an adoption application today! 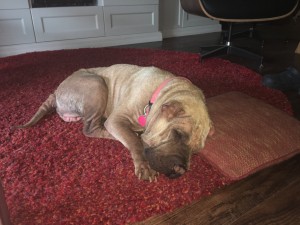 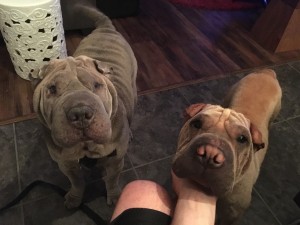 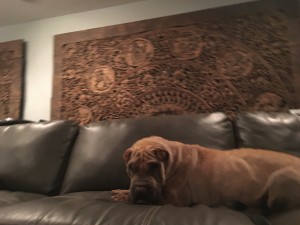 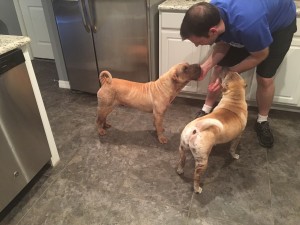 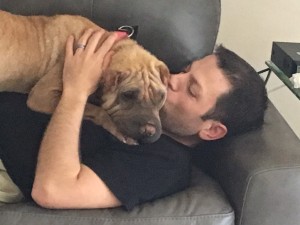 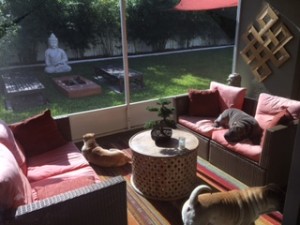