FSPR is working on a special project — Trixie.

UPDATE #3:  Trixie has had her surgery and it was successful.  She is now on the road to recovery and has stolen many hearts along the way, including those of her foster family!  It looks like Trixie has found her forever home right where she is.  Her foster family has decided to adopt her.

UPDATE #2:  After much contemplation and several professional consults, FSPR has decided it is in Trixie’s best interest to move forward with amputation of her paralyzed left front leg.  Her tentative surgery date is mid-March.  Trixie is growing into a delightful dog and will make a wonderful pet after her rehab is complete.

UPDATE #1:  Trixie is now around 4 months old and has been evaluated by 2 neurologists.  Unfortunately, the prognosis for saving her leg isn’t a positive one.  It is the recommendation of both neurologists that her leg be amputated due to nerve damage that cannot be reversed.  Our final attempt to save Trixie’s leg will be a consult with a prosthetics specialist who would like to make a brace if possible and avoid amputation.  No matter the outcome, Trixie is a delightful girl and will adapt to whatever is decided to be best for her.

Trixie is a 12 week old female shar-pei, who came to us after being found on a golf course in central Florida.  She was presumably injured and this injury resulted in nerve damage causing paralysis of her left front paw.  Upon initial veterinary examination, after joining FSPR, she was found to have some pain in the left shoulder so the doctor believes that is likely where the injury occurred and this caused radial nerve paralysis.  We have consulted with an orthopedic veterinary office and our next step is a neurology veterinarian to determine the extent of the damage and the best possible treatment plan.  There is a possibility her left front leg will require amputation.  Trixie is doing well and will be available for adoption but not for some time, yet.  Adoption applications are not yet being accepted for Trixie as we are unsure of the timeline for her medical care.  Please, check back often to see updates on this cutie-Pei!  Here is a little sneak peek for you… 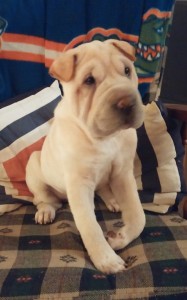 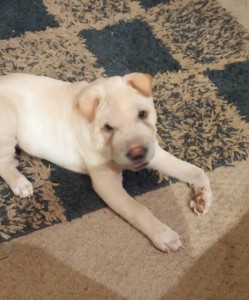